"Hi, I'm Paul!" a voice greets me from somewhere below the deserted pier at the harbor. A glance down shows that a small cutter is moored to the rubbing pile below the pier. On it, a weather-beaten man with a broad laugh wrapped in oilskins and wearing rubber boots. At the stern and at the side of the small cutter "Tümmler" hang lashed nets on metal devices, among them a small stove and many colorful plastic baskets for the haul (for the light sailors among us: the catch). It's two o'clock in the morning at Lister Hafen

After a brief technical check on the navigation equipment, Paul starts the engine and we chug slowly towards the exit of the harbor. As soon as the lights of the harbor fade behind us, only the black sea surrounds our cutter. The spray of the waves shines a little brighter, but the narrow moon and the clear stars illuminate our fetch only very moderately. We have set our course eastward toward Denmark, and the green and red lights of the marker buoys and the beacon of the two Lister lighthouses on the elbow serve as orientation. On the horizon in the direction of the Danish neighboring island of Rømø there is a bright dot, which later turns out to be the ferry of the Sylt Express.

After a few minutes, the instruments in the wheelhouse indicate that the seabed is more than ten meters below us - so it's time to lower the cutter's net into the sea. When most of the net has disappeared into the black water, the boat starts prancing on the water, pulling left and right and turning. Paul doesn't seem too concerned about this - he adjusts the net and then comes back to the front of the boat quite relaxed. The net now has to do the work, and in the wheelhouse there is time for sailors' yarns and stories from the past. Back then, when Lister Hafen still belonged to the federal government, the buoys (sea marks) were still stored in the buoy hall in winter, artists created paintings of the Wadden Sea in small studios and two small stalls offered fish sandwiches and jam sandwiches for sale.

Many a tale of vanity, pride and big politics entertain the light sailor while the engine chugs steadily through the night and across the Wadden Sea. "Why do we have to go out in the middle of the night to fish for crabs?", I turn to Paul and try to figure out why I'm spending the night! He immediately has the answer and enlightens me: "Boy, when it's light out, the crabs can see the shadows and jump right over the top of the net.

More than an hour passes over Paul's stories and not being able to get enough of the lights of List on Sylt and the lighthouses on the Elbow. A first trace of dawn can be made out in the eastern sky and Paul throttles the engine down slightly. Time to pull the net from the depths and see what quantities of crabs we were able to catch on the seabed today. Before the winches start to roll up the hawser with the net, Paul lights a fire in the small stove so that the crabs from our haul can be cooked right away. Slowly the winches work the chains upwards round by round and finally a bulging net breaks the water surface. Finally brought aboard the cutter, the open net fills the bin for the catch to the brim - along with thousands of small crabs, small fish and colorful starfish. Thanks to the fish separator, what doesn't belong in the haul lands right back in its element, and Paul begins to clean the fished crabs with salt water. Rising steam indicates that the seawater in the stove has reached its boiling point and a first batch of our night's work lands in the pot with a little salt.

Soon the delicious smell of freshly cooked crabs fills the wheelhouse and the anticipation of the tasting increases. Load after load of the little sea creatures goes into the stove, is cleaned again and finally lands in the orange catch basket. And while the slowly rising sun transforms the black sea into a dark blue sea, the fresh crabs can finally be tasted. What a breakfast in the middle of the sea! After the last ration has been cooked, the deck has cleared up and our haul is well stowed, Paul turns the bow of our cutter back towards List harbor on Sylt. Almost by itself the "Tümmler" finds its way back towards the berth and safely navigates the current in front of the harbor entrance. The ropes are lashed and the result of our nightly adventure is hoisted ashore. It is half past six in the morning at Lister Hafen. With the delivery traffic, the harbor slowly comes to life. Time to come home with fresh rolls. 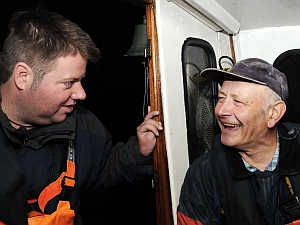 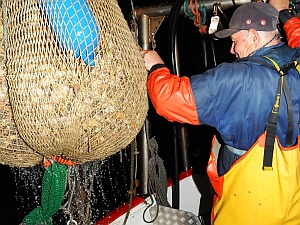 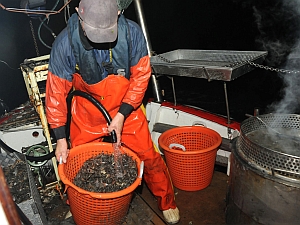 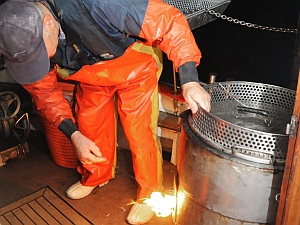 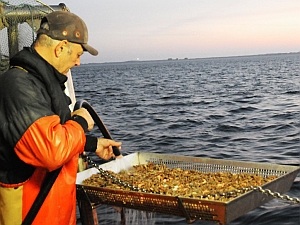